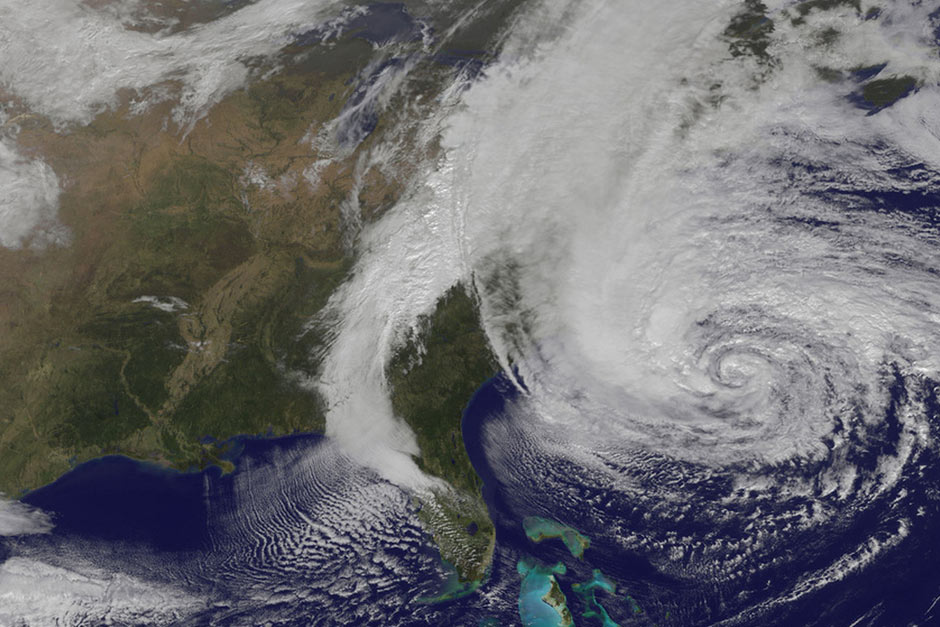 Well the big one has hit the East Coast and it is doing what the authorities have predicted. For over one week we have been warned of gigantic Superstorm Sandy with unusual circumstances shaping up to create Sandy, a monster storm.

Authorities have been preparing for days and strongly encouraging residents to prepare. Some people got prepared, some did not, and some people got out.

It has become clear in recent years that our technological ability to see storms coming has improved. People need to learn this is working better and pay attention to the warnings.

We have provided Links throughout the article and at the end for related news stories.

It has shown Hurricane-like characteristics, Hurricane Sandy melded with and matched up with other weather anomalies at the right time to create a superstorm. Super Storm Sandy.

We saw it forming as it moved closer to the Eastern Seaboard. The storm claimed over 60 lives before reaching the United States and has claimed several since hitting our country with ferocity. The monster storm, monster storm Sandy, has all but missed Florida and hit land fall above, crawling ahead in the upper 20 mile per hour range into the states, pushing its gusting winds, spinning outward from the storm's eye, with gusts at well over 100 miles per hour. This storm is battering us in the East.

This, with the incoming high-tide of the Atlantic Ocean topping off at 12:00 a.m. October 30, 2012 in the areas near New Jersey and New York, which converged with other arterial waterways, flowing in the opposite direction caused major flooding, including the tunnels of the subway systems. There will be lots of water coming in for at least a day and a half. The repercussions and clean-up will last longer, of course.

The slow approach and fast spin have created a two hundred mile wide storm front that has been blowing and gusting like no body's business. Very heavy and unusual weather causing high wind, heavy rain, thick snow and ice are the result. There will be a cooling trend for a week to come.

Virginia ski resorts predicted they will receive a couple of feet of snow. Their peaks, while not considered very high at around 5,000 feet, will grab the biggest part of the snow before the rest get it. Spokespeople there have mixed expectations and are waiting as the events unfold over the next two to four days.

Coverage of the super storm throughout the media on Monday, October 29, 2012, included several reporters feeling the need to wade in knee deep or deeper water for the camera. Most of the coverage was fairly repetitious with all of the agencies chattering away non-stop.

Meteorologists said they have never seen this type of weather here before. The subway tunnels have never flooded, this is a first.

Presidential candidate Mitt Romney and President Barack Obama have altered their campaigning accordingly and will most assuredly do whatever is possible to get the final push for this November 6th election day.

President Obama left his campaigning in Florida, an important state for both candidates, to return to the white house for some appropriate presidential speech regurgitation. You can bet both men will do whatever they can for brownie points, showing their respective ability for compassion and leadership.

The side of a three story apartment building fell right off and exposed the interior of the rental rooms inside the building. No one was hurt in that scene. A big commercial crane atop a giant sky scraper, 60 plus stories tall, broke and is dangling over the city, as if that isn't enough to get your attention, all of the bridges and tunnels have been closed.

Hang in there all of you people on the East Coast! The next couple of days will pass and the water will subside. The flooding will be difficult to deal with and it was definitely a no-brainer for governors to declare states of emergency in the affected areas.

This too will pass. Our thoughts and prayers are with you as we watch these events unfold on television, from the rest of the United States, Canada and Europe.

One sometimes wonders if there have been advances in weather creation and alteration technologies. Can anything be done to lessen the effects of a storm like this? Has someone figured out how to increase the converging system anomalies to create super storms, perfect storms or monster storms?

We encourage anyone who is able to, to offer assistance and encouragement to those who have been and will be affected by Superstorm Sandy.

Whether this began as the perfect storm or hurricane sandy, it is most definitely a monster storm.

Category:
PI BLOG
Tagged as:
« Asset Search Private InvestigatorPrev
How Do I Know if my Wife is Having an Affair at Work? »Next
Get a Free Consultation